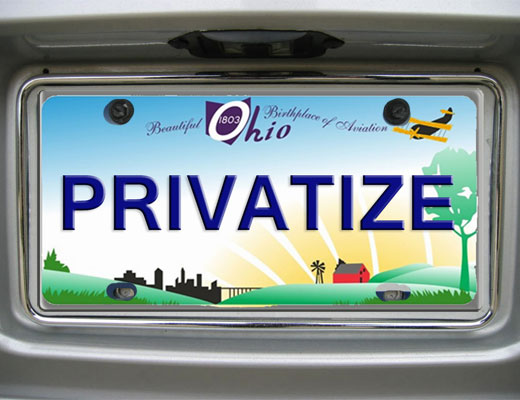 The most recent slew of misguided statements appeared in a Dayton Daily News article on the risks of outsourcing Bureau of Motor Vehicles services to small-business owners acting as deputy registrars (see Saturday, August 13, 2011, “BMV records kept secret from public”).

Some quoted in the article fear that Ohioans are unable to know whether privately operated BMV offices are a good deal unless their operators (deputy registrars) itemize their expenses.  The deputy registrars disagree.  Some refuse to publish such data; others don’t track it at all.

For starters, the allegedly secret records have nothing to do with the BMV’s stated mission to “[fulfill its] obligations” toward Ohio’s “motor vehicle laws,” which it mainly does by performing license-related services.  The “big secret” is merely the operating budgets of these privately run branches–hardly the public threat some suggest.

The claim that privately run BMVs dodge public accountability is equally spurious.  These offices–essentially small-business franchises–are subject to the most stringent accountability of all: the law of the free market.  This law says, “produce at greater value for Ohioans than the government can, or go out of business.”  As small-business owners, private deputy registrars have a vested interest in serving Ohioans well.  When governments grant them freedom to think and act creatively, by lifting all restrictions except the truly indispensable, businesses and customers alike improve their bottom lines.

But “if this service is privatized,” objects one interviewee of the same article, “how can you tell if you’re getting a good deal?”  We know because the market is open to competitors who will do the same job for less if they can.  The vast majority of Ohioans don’t need, or probably even care, to know a deputy registrar’s operating costs, because competitors have an idea and are already working toward beating them.

It is businesses, not taxpayers, that take on the real risk of privatization.  They have the most to lose (i.e., their livelihood), and therefore the most incentive to perform well for Ohio.

Government-operated BMVs don’t have such incentive.  Perhaps that is why at least one office (ironically) run by the Montgomery County Auditor operates at a loss.  Meanwhile, Sheryl Green’s privately run office in the same county generates three times as much revenue.  The question Ohio taxpayers should be asking is why the publicly operated office is allowed to remain open in the red when competitors are in the black.

Meantime, there is a market-friendly way to persuade contractors to itemize their expenses: pay the market value.

Gathering data has a labor cost attached.  A mid-wage employee at Green’s office might knock it out in a week, but it is hardly fair to expect Green to divert resources from actual BMV affairs to provide an extra service free of charge.

Better yet, compensating Green would urge competitors to publish their operating budgets for cheaper or free–forcing Green to do the same when her three-year contract reopens for bidding.

We all would rather get something for free than pay for it.  But most valuable products and services cost the provider.  Ohioans (like all Americans) have a basic right to be compensated for those costs.  Expecting private deputy registrars to deliver a service they never promised, and that no one originally demanded, subverts that right.

Michael Hamilton teaches AP U.S. Government & Politics and Honors American Literature at Dayton Christian High School in Miamisburg.  He holds a B.A. in English from Hillsdale College (‘08).  He is the Executive Editor and a Co-Founder of OCR.

All opinions expressed belong solely to their authors and may not be construed as the opinions of other writers or of OCR staff.

“Tomi doesn’t speak for us”